Skip to content
AdminOctober 15, 2018July 14, 2019 Itabaza No Comments
CNN — Diane Rwigara, a leading critic of Rwanda’s President Paul Kagame, spent more than a year in prison before she was released on bail Friday.
Now, as she awaits her trial in Kigali next month for incitement and election fraud, the 37-year-old human rights activist says she is more determined than ever to make her voice heard.
“(Jail) has not squashed my political ambitions at all,” Rwigara told CNN in an interview. “On the contrary, it has given me more determination because I just don’t see myself and everyone else I know keeping on living in fear.”
The fear that Rwigara is speaking about is one that she and her supporters say envelops a large part of Rwandan society, a society she wants to see change. 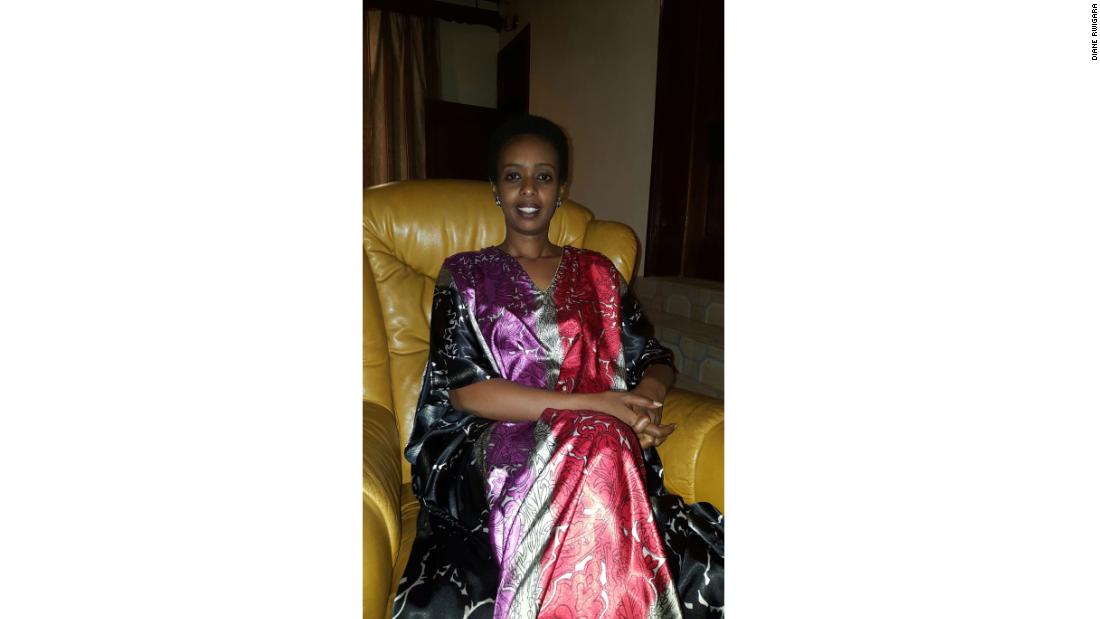 Diane Rwigara, at her home in Kigali on Tuesday.
Last year, Rwigara was poised to be the Kagame’s sole female challenger in the August 2017 presidential election. But days after she announced her plan to run, someone posted nude photos — allegedly of her — online.
Rwigara says the images were digitally altered as a tactic used by the government to discredit her as both a female and oppositional voice. A spokesman for Kagame’s party at the time denied to CNN having anything to do with the photos.
“With the photos, it was because I was a woman. But overall, anybody who dares to challenge the government is viciously attacked — whether you’re a man or a woman,” Rwigara said.
Rwigara was eventually disqualified from contesting the election by electoral authorities who claimed she falsified the number of signatures needed to qualify and accused her of submitting the names of dead people. She denies it all.
Determined to “encourage Rwandans to hold their government accountable,” Rwigara then launched the activist group, the People Salvation Movement (Itabaza). Shortly after, she was arrested on charges of incitement and fraud. Her mother, Adeline was also arrested on charges of discrimination and sectarian practices and inciting insurrection, based on WhatsApp messages exchanged between her and her sister, who lives outside Rwanda.
Read more: She wanted to become president, but ended up jailed instead
“Those were trumped-up charges, made-up charges,” Rwigara said.
“I know the Rwandan government is scared of the movement — it’s scared because they know I’m speaking the truth and they do not want to be exposed,” she added. “That is the main fear that they have — the fear of being exposed.”
Rwanda’s National Police, Office of the President and its ruling political party, the Rwandan Patriotic Front (RPF) have not responded to CNN’s repeated requests for comment.

‘They try to demonize you’

Kagame, who won the 2017 presidential election with almost 99% of the vote, has been president since 2000 and a longtime, instrumental leader in Rwanda’s modern history.
The Rwandan leader is seen as the architect of the nation’s remarkable turnaround following the social and economic destruction from the 1994 genocide, where an estimated 800,000 people — mainly from the Tutsi group — were killed over the course of 100 days.
Kagame’s commitment to gender parity, which includes a constitutional law requiring at least 30% of all parliamentary seats to be occupied by women, has led the country to be often quoted as the best place for women in politics. (Today Rwanda far surpasses that quota, with 61.3% of its parliament made up of female lawmakers.)
But Rwigara says that say that quota is just window dressing for the ruling party’s agenda.
“I think the only women who are welcome are the women who speak the language of the RPF (Kagame’s ruling party). They are the only women they want. If you dare to speak a different language, you are no longer part of society. They try to demonize you, they attack you in any way that they can,” she said.
Kagame’s fiscal and social policies also are widely cited as a blueprint for success in the region — but endemic poverty remains an issue nationwide, with nearly half of the population living under the international poverty line, according to the World Bank.
“I’ve talked about, and I am still talking about poverty and unemployment,” Rwigara said of her movement’s mission, which she hopes to reinvigorate now that she’s been released. 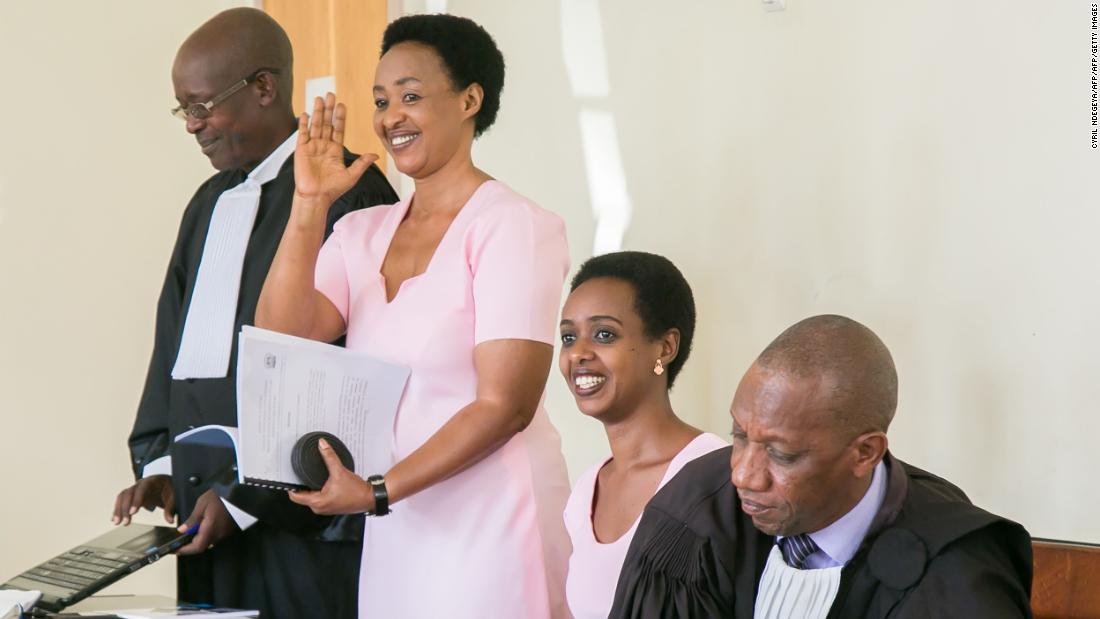 Diane Rwigara and her mother Adeline Rwigara inside Kigali’s High Court on September 24, 2018.
“Kigali is full of nice buildings, but the people live in poverty. The focus of our government has been things, buildings. But they have not been able to build up people’s lives. They (Kagame’s government) are more interested in impressing the outside — the West — than impressing their own people, the Rwandan people,” she said.
“The fact that Kigali is clean and nice-looking does not mean that our government cares about its own people. People are harassed, people disappear, people get killed, and all those things our government doesn’t want us to expose.”

This summer, CNN traveled to Kigali and spoke with Rwigara’s family and her supporters, who allege harassment, censorship and threats of violence by the government.
Rwigara is aware of those cases, but says it has not deterred her to encourage her fellow Rwandans to find their voice.
“It has not been an easy journey… but that does not stop us from going forward because I see this movement as the main channel for our voices to be heard,” she said.
Still, she is appealing to the government to allow her family and supporters to live in peace.
“It’s one thing to punish me for my beliefs, but it’s another thing to punish everyone around me,” she said, noting the charges against her mother and the Rwanda Revenue Authority’s auction of her family’s business.
But it is not just Rwigara’s supporters who allege violence or the threat of violence at the hands of the Rwandan state.
Kagame’s regime has been long criticized by human rights groups such as Amnesty International and Human Rights Watch for its attacks on the political opposition, human rights defenders and the press. Several high-profile cases, including the imprisonment of another opposition party leader, Victoire Ingabire, the mysterious death of a former Rwandan intelligence chief and the recent disappearance of another opposition leader from jail, have shined a harsh light on Kagame’s regime.
Related: ‘If you have other opinions they put you in jail’
For bringing some of these issues to the forefront of the national conversation, Rwigara says she was placed in jail.
“I criticized the government and this is what happens in Rwanda when you criticize the government — you are punished for it. The punishment for me was prison,” she said.
Rwigara says she’s not fearful of what might happen to her and her mother in their trial, scheduled for November 7. Both have proclaimed their innocence.
Ultimately, she believes it is up to Kagame, noting the president’s overarching influence.
“I don’t know what will happen,” she said when asked about her trial. “You will have to ask the president.”
Rwanda’s National Police, Office of the President and its ruling political party, the Rwandan Patriotic Front (RPF) have not responded to CNN’s immediate request for comment.
For now, Rwigara says she will continue to work with members of her movement to encourage Rwandans that they “have the power to change things.”
“It’s for us to dare to speak out — because all Rwandans see what’s going on, they see what’s happening, but they’ve been pushed to silence,” she said.
“The Rwandan people should be the first to get out and speak out and force our government to be accountable, because our government isn’t accountable to anyone.”
Editors Note: CNN is committed to covering gender inequality wherever it occurs in the world. This story is part of As Equals, a year-long series.
Source Link