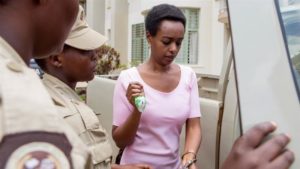 Diane Rwigara, a prominent critic of Rwanda”s president Paul Kagame, is handcuffed as she arrives at the courtroom in Kigali [Jean Bizimana/Reuters]

Diane Rwigara is released on bail after over a year in jail on charges including inciting against Rwandan government.

Rwandan opposition activist and former presidential candidate Diane Rwigara has been released on bail after spending more than a year in jail on charges including inciting insurrection against the government of President Paul Kagame.

A high court in Kigali on Friday ordered Rwigara and her mother Adeline be released on the condition they do not leave the capital.

While the prosecution had pushed for the two women to remain in detention, the court said that was unnecessary as investigations had been wrapped up and they could be bailed while on trial.

“It’s a great day for us and we are looking forward for a fair trial ahead,” Diane’s sister, Anne, told the Associated Press.

Rwigara is the daughter of the late Assinapol Rwigara, a businessman who fell out with the government before his death in a car accident in 2015.

Diane Rwigara will return to court on November 7 over charges of forgery and insurrection. She faces up to 15 years in prison if convicted on the insurrection charge. Her mother also faces criminal charges.

The mixed tale of women’s empowerment in Rwanda

Her release on bail comes weeks after another prominent Rwandan opposition leader, Victoire Ingabire, was freed from prison following the government’s early release of more than 2,100 prisoners with little explanation.

The US-educated activist, who has accused Kagame of stifling dissent, was barred from running against him in elections last year in which he won more than 98 percent of the vote, extending his 17-year-rule.

Rwigara insists the charges against her are politically motivated after she spoke critically of Kagame’s human rights record.

Rwanda has won praise for its advances in economic development and women’s rights over the past 20 years, but critics say Kagame does not tolerate criticism. His government has rejected such accusations.