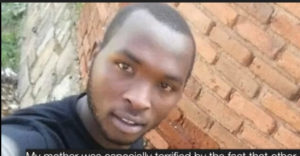 Ngirinshuti Jean D’Amour, an aid to Rwandan imprisoned president aspirant Diane Rwigara has been missing since August 2017. Feared to have been killed by the Rwandan government, his sister tells the sad story.

Ngirinshuti Jean D’Amour’s sister tells us what his brother went thru before he disappeared:

She hope to encourage other Rwandan families whose loved ones have been killed or disappeared by the current brutal regime in Rwanda led by Paul Kagame, to tell their stories to the world so that the oppression in Rwanda may be well publicised and no longer ignored and brushed under the lies of development that are sold around the world by the dictatorial repressive regime.

One thought on “SOS: One of Diane Rwigara’s supporters, Ngirinshuti Jean D’Amou, has been killed by Kagame’s government”