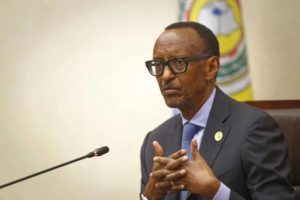 In Rwanda, if your surname is not Rwigara, you could be pardoned for saying that Paul Kagame is a good man. According to the council for the promotion of endorsed ruiners, Kagame’s Rwanda is a success story. So successful that last year it welcomed 1.3 million visitors, one of the highest to any African country with each tourist paying roughly $1,300 to see the country’s tourist potentials. That desire to visit sustained 900,000 jobs.

So successful was the tourism industry that the Rwanda Development Board, RDB hopes to gross $800 million from tourism by 2024. It claims to have a wealth sharing esusu that benefits communities that these tourists visit. The government in Kigali does not like opposition. In fact, dictator Paul Kagame who calls himself born-again wouldn’t spare Diane Shima Rwigara, the 36-year old woman who broke taboo to challenge him for the 2017 endorsement. Not only was she arrested, her mother and members of her family were charged for alleged tax evasion.

Nobody rules Rwanda like Paul Kagame and until now, he has been the poster boy of the Western world that props up any government that does its bidding. But if feelers from the New World Order are anything to go by, even Kagame’s face on the poster may be obliterated. Last week, the United States warned Kagame’s government to expect strong reaction after it failed to lift the ban on second-hand clothing. This has nothing to do with fungal dermatitis, scabies or other diseases that doctors claim lurks behind second hand clothes. America is the big source for Rwanda’s second-hand business and if Trump could bully China and arm-twist Canada and Mexico, imagine what it could do to little Rwanda so dependent on foreign aid for survival?

If Kagame continues to stare the wounded lion, the consequences could be bad indeed. If Kagame is a student of black history, he should know that nationalism comes before a fall. The declassified CIA files on the deaths of Ahmed Ben Bella, Thomas Sankara or Murtala Muhammed would suffice. Kagame should make peace with Diane now that he has the chance, after all, the lady was more charitable than Stella Nyanzi who called Yoweri Museveni a pair of buttocks and lived to relate the story.

From all indications, it could pour for Rwanda. Part of the Kagame plan to keep the tourists coming is hinged on advertisement. Kagame is a die-hard Arsenal fan. His enemies swear that unlike his Burundian neighbour Pierre Nkurunziza who loves to play and score goals but loathes being tackled; Kagame loves to watch the game from the sidelines. Last year, the RDB signed a £30 million pact with the UK-based Arsenal Football Club that should see Arsenal stars wear Rwanda inscriptions and help the country develop its football for the next three years.

But already, a British MP says it’ll look like a kick in the teeth to British taxpayers who gave Rwanda £60 million in aid last year. Andrew Bridgen, says the so-called pact would favour Kagame to sit in a VIP corner at Arsenal matches rather than identify Rwanda’s Ronaldos or Zidanes. He might be leading the call for aid withdrawal. If that happens, Kagame’s dream of going to his grave as a benign dictator whose life presidency helped his country might be shattered. So would the dreams of those who work at the Akagera National Park, Nyungwe Forest Lodge and the animals of the Volcanoes National Park.

It is somehow sad that everywhere the black man looks these days, there is despair. Despair sends thousands into slavery in Libya with uncountable numbers dying in their quest to reach the shores of modern slavery. Since the Starbucks saga in America, more disheartening videos and encounters with racism keep surfacing. Poster boys are only free to do as they are told. In spite of himself, the decision by Kagame to encourage home-grown textiles by banning American hand-me-downs ought to be good news. Wasn’t self-sufficiency the hallmark of independence? Africa is free to do as it’s told.

While Kagame is using his tongue to count his teeth, the Ethiopian government is fighting a bigger war – the war against the appropriation of traditional property. It recently delegated its lawyers to file charges against a Health and Performance Food International, HPFI a Dutch company it contracted to package it’s national grain – teff for global export. The teff grain, a major ingredient in the famous Ethiopian bread – injera, has received incredible acceptance across the globe. Rather than package the deal, the company allegedly botched the contract only to go and patent the rights to the grain’s products in Italy, Britain, Germany, Austria and the Netherlands. This robs Ethiopia of its rights to claim teff as its own and promises to be an interesting reference point in international intellectual property law. Ethiopia and present Eritrea have grown and used teff before modernity but it remains the property right of HPFI which patented it until that backdoor patent is quashed.

Teff is a supergrain for those seeking organic and health-giving alternatives to the carcinogenic foods that are flooding the African market. Who wins the war against intellectual colonialism in Africa?