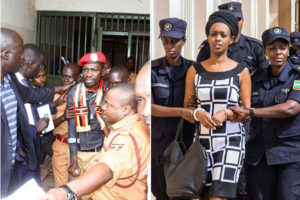 Uganda’s Bobi Wine leaving the court; right, Rwanda’s Diane Rwigara being taken to court. The region is seeing a shift. Young, bold and vibrant leadership is coming to the fore. PHOTOS | NMG

A few weeks ago Bobi Wine was famous among mostly Ugandans; fast forward to today and you would not believe the international attention his name has received.

But the torture he went through as a serving Member of Parliament, is not unique to Uganda, so why did it ignite so much anger?

Bobi Wine definitely has a following and his popularity continues to grow exponentially, considering that he won a by-election only last year.

Perhaps what we are seeing is that people are just plain tired of President Yoweri Museveni’s interminable rule. President Museveni has been there so long that people my age have known only him as president of Uganda.

Let us think about that for a minute; they do not know what it feels like to see another picture hanging on the walls of government offices. They do not know what it sounds like to hear a national address during a public holiday from another individual: Questioning how the speech was read, or laughing about peculiar mannerisms.

We can tell when our president is upset or being brutally honest. When he is just chilled, we have learned that. We even have memories of president Mwai Kibaki calling one of his drivers mjingaduring an address.

Presidents are the underlying flavour of our everyday lives – some we are glad to see come in and others we cannot wait to see the back of. I know people who have stopped watching news in the United States because of President Donald Trump, even they used to be avid consumers of political news. Now they mute the news channels and skim through newspapers.

There is definitely a wave of change that is occurring in the region, the once young firebrands are ageing and succession plans were never part of their life goals.

The acronym YOLO to our our founding leaders meant You Only Lead Once; grabbing the presidential seat, they literally hang on for their life. Not too far off we have President Paul Kagame – the debate around him is conflicted; ask people in Rwanda whether it is better to have some form of development but feel trapped, or rampant corruption but some sense of democracy, and the courageous ones will whisper the answer.

The region is seeing a shift. Young, bold and vibrant leadership is coming to the fore.

We have to recognise that these mantles of leadership were grabbed through bloodshed. So much so, that old-time politicians when speaking about young people, tell them “If you want leadership, grab it, it will never be given to you,” that it must be fought for with blood.

Diane Rwigara, the only woman who wanted to vie for president in Rwanda was thrown in jail, in a country that prides itself on putting women in positions of leadership. The irony!

However, questions are being asked why there was not much international attention for Diane as compared with Bobi?

The overriding difference is that the people must want the change for themselves. Those observing from outside cannot speak for those within.

In the case of Uganda, the people spoke loud and clear and it was easier to jump on the bandwagon and support them. How do you “save” someone who is not even sure if they want to be saved? The battle within is the fiercest battle that you will ever face.