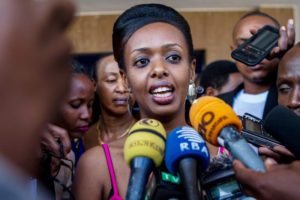 After more than one year in prison, Rwanda’s High Court finally released Diane Rwigara, a well-known political opponent, and her mother, Adeline, on bail. They cannot leave the capital, Kigali, without permission, and their trial – on politically motivated charges – continues.

They were arrested last year, just days after Rwigara was barred from running for office in the August 2017 presidential election. Their release follows President Paul Kagame’s surprise pardoning of 2,000 prisoners last month, including another political opposition leader, Victoire Ingabire, and the musician and activist, Kizito Mihigo.
These announcements come as Rwanda is vying for its foreign minister, Louise Mushikiwabo, to be named as the new head of the International Organization of the Francophonie. The decision will be made during the Francophonie summit in Armenia this week. While Mushikiwabo has the support of France and the African Union, some observers have raised concerns about Rwanda’s human rights record, which contradicts the core principles of the Francophonie’s founding charter and the 2000 Bamako Declaration, which asserts that the Francophonie and democracy are inseparable. Rwanda’s ruling party separated itself from the pretense of key core democratic principles, such as respect for rule of law, years ago.
While the recent prisoner releases show Rwanda may be turning a new leaf and opening up political space, more than a grand discretionary gesture is needed to show that this is the start of systemic or meaningful change.
First, authorities should drop the politically motivated charges against Diane and Adeline Rwigara and release other political prisoners who remain in detention. Authorities should also stop threatening former prisoners and suggesting liberty is arbitrary, as Kagame did when he alluded last month that Ingabire would be sent back to prison if she did not “humble” herself.
The government has to end summary executions, enforced disappearances, unlawful arrest and detention, and torture – all of which remain too common in Rwanda today. To signal that such crimes will no longer be tolerated, officials responsible should be held to account in fair, credible trials.
This would show that Rwanda is really turning over a new leaf, that the country’s political thaw is real, and the country is ready to uphold tenets of the Francophonie on human rights.