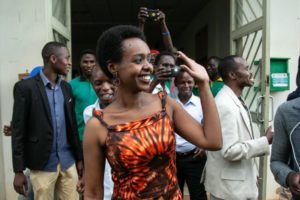 Kigali (AFP) – Rwanda’s government has withdrawn an appeal against the acquittal of dissident politician Diane Rwigara, who was tried on charges of inciting insurrection and forgery, prosecutors said Wednesday.

Rwigara was found not guilty last month at the end of the high-profile trial that highlighted a crackdown on the opposition in the East African country.

Prosecutors had appealed the acquittal, but the justice ministry last week instructed them not to go forward with it.

Rwigara is the daughter of Assinapol Rwigara, an industrialist who in the 1990s was a major donor to the ruling Rwandan Patriotic Front (FPR) party before falling out with its leaders.

She became an unusual voice of criticism in tightly-run Rwanda ahead of the country’s presidential election in August 2017.

Her bid to run in the poll was denied on the grounds she allegedly forged the signatures of supporters for her application.

She was arrested in September last year and charged with forgery and inciting insurrection for comments criticising the government and President Paul Kagame in the run-up to the vote.

After spending over a year in jail, she and her mother were released on bail in October, and acquitted on December 6.

Their acquittal came at a time of immense international pressure on the government of Rwanda, with several American legislators, as well as organisations like Amnesty International calling for their release.

Kagame has been praised for putting Rwanda on the path of economic transformation after the 1994 genocide that devastated the tiny east African country.

But he faces regular criticism over rights abuses in his country and intolerance of the opposition.