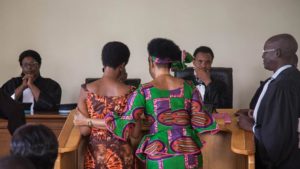 Diane Rwigara and her mother Adeline Rwigara together with their lawyers in the High Court on Thursday. / Nadege Imbabazi

“From the onset, we said we were not satisfied with the High Court ruling and promised to review the judgement and decide the next step. We read through the judgement and did not feel convinced, so we are appealing that decision,” Mr Mutangana said.

He said the court disregarded the evidence prosecution had presented.

“We reviewed the judgement and found that much of the evidence that was tendered by prosecution was either not motivated or not considered,” said Mr Mutangana.

“While we respect court decisions, our job is to defend the interests of the public…we were not comfortable with some of the decisions made by the court and we want to exercise our rights granted by the law by appealing this decision in a higher court which is the Appeals Court,” the prosecutor general added.

NPPA has 30 days from the December 6 ruling to file its petition.

The High Court ruled in favour of the Rwigaras, with judges describing the charges levelled against them as “baseless”.

The three-judge panel also ruled that there was no proof that the former presidential hopeful and her mother incited revolt against the government through privately shared messages and that criticising the government amounted to their right to free speech.

Their acquittal came after sustained pressure from rights groups and the international community, who accused Kigali of cracking down on dissent and freedom of expression.

The Rwigaras’ release was seen as a sign of Kigali yielding to pressure, but some observers argue that the court confirmed its independence.

Responding to the development, Ms Diane Rwigara, called on prosecution to accept the ruling terming the appeal as “legal witch-hunt”.

“We are ready to continue defending ourselves against these trumped up charges. There was no evidence in the first place, there won’t be evidence in the appeal. I call upon prosecution to accept and respect the court ruling, and effectively put an end to this legal witch-hunt.”