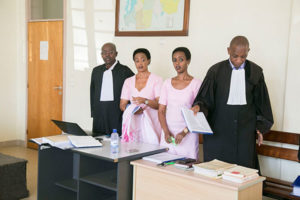 Diane Shima Rwigara and her mother Adeline want one of the trial judges to be recused.

Through their lawyers, the pair said that the judge was involved in their pre-trial detention hearings in which they were denied bail and is therefore biased.

The two appeared in a Kigali court on Monday for bail application hearing.

“As stated in the law, the hearing cannot proceed if one of the judges had a role in the pre-trial hearing on provisional release,” Pierre Celestin Buhuru, a lawyer for the Rwigaras told the court, adding that they had filed the request with the court registrar on Friday.

Article 103 of the Law No 22/2018 of 29/04/2018 relating to the civil, commercial, labour and administrative procedure, gives several reasons to disqualify a judge among them is if “the judge has already given an opinion or advice on the case before the hearing of the case”.

Clause 6 of the same article also states that a judge can be disqualified if he or she “once intervened in the case as a judge, a mediator, a prosecutor, a judicial police officer, a party, a witness, an arbitrator, an interpreter, an expert or as a public servant”.

The defence lawyers, Mr Buhuru and Mr Gatera Gashabana, asked the court to postpone the hearing until the judge, who they did not name, is replaced.

Diane, a government critic and former presidential contender, is facing charges of forgery and insurrection while her mother is accused of insurrection and promoting sectarianism.

Diane’s bid for the presidency in 2017 was unsuccessful after she was disqualified.

The Rwigaras says the charges are politically motivated and a move by the government to punish Diane for her presidential ambitions.

The family also alleges that their troubles began in February 2015 when they questioned the manner in which the patriarch tycoon businessman Assinapol Rwigara died.

They are also battling property auctions as the taxman moves to recover $6.5 million it says it is owed by the family-owned businesses.

The trial Monday was attended by family, friends, diplomats and Victoirie Ingabire, an opposition politician who was recently freed having been granted a presidential pardon after six years in prison.

Ms Ingabire, released on September 15, is already facing backlash from the government for appearing to be defiant.

Immediately after her release, she told journalists that she hoped President Paul Kagame would pardon other “political prisoners,” a statement that some government officials say is misleading.

She also met Anne Rwigara, sister of Diane Rwigara, as well as another politician, Bernard Ntaganda, who was released in 2014 after serving a four-year sentence for conducting illegal demonstrations.

President Kagame has issued a strong warning that Ms Ingabire’s claims that she did not seek presidential clemency could land her back in jail.

Diane and her mother have already spent a year in prison since their arrest last September.

Their trial has been delayed several times with some of the setbacks including the prosecution’s request for delay until four other people are arrested and presented in court. The four all live abroad.

The High Court agreed to postpone the trial on Monday until it addresses the issue raised saying a new date will be announced later.