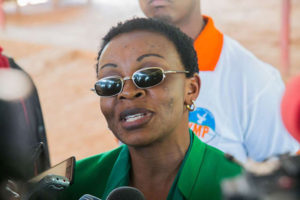 Rwanda’s opposition leader Victoire Ingabire speaks to the press after her releases from the Nyarugenge Prison on September 15, 2018

Rwandan opposition politician Victoire Ingabire is facing backlash from the government for appearing to be defiant, even after she was granted a presidential pardon for crimes she was convicted in 2012.

Ms Ingabire, founder of the unregistered opposition party FDU-Inkingi, was last week released from prison after serving six years of her 15-year jail sentence, which the Supreme Court handed her for belittling the 1994 Genocide Against the Tutsi, forming an armed group and inciting public revolt.

Immediately after her release, Ms Ingabire told journalists that she hoped President Paul Kagame would pardon other ‘‘political prisoners,’’ a statement that some government officials say is misleading.

Ms Ingabire later told BBC that she received a presidential pardon without requesting one. But the government insists that she had asked to be pardoned.

“I know for a fact that she asked for presidential pardon. I am not speculating; she is lying,” State Minister for Constitutional and Legal Affairs, Evode Uwizeyimana told a national radio station.

“I don’t understand why people refer to her as a politician or political prisoner… Or any of the people who were released. They committed crimes and political parties have laws that govern how they are set up and how to conduct activities,” added Mr Uwizeyimana.

A presidential pardon is granted only upon application made in writing, addressed to the president and copied to the Justice Ministry.

“Upon receiving application for pardon from Ms Ingabire, the Supreme Court, Ministry of Justice and National Public Prosecution Authority provided the president their opinions in regard to Ms Ingabire’s application, like any other applicant,” Mr Uwizeyimana told The EastAfrican.

Upon her release, Ms Ingabire met another politician, Bernard Ntaganda, who was released in 2014 after serving a four-year sentence for conducting illegal demonstrations.

She also met Anne Rwigara, sister of Diane Rwigara, an aspirant in the last presidential election who was arrested alongside her mother and charged with forging documents and inciting public revolt.

Ms Rwigara, however, told The EastAfrican that they did not discuss anything political.

President Kagame has issued a strong warning that Ms Ingabire’s claims that she did not seek presidential clemency could land her back in jail.

“You hear people saying ‘I didn’t apologise to be freed, I can’t apologise. They freed me because of pressure…’ Pressure here? If you keep acting like that, you may find yourself back,” he told MPs while presiding over the swearing-in of the Members of Parliament on Wednesday.

“Pressure does not work here… You could find yourself back there or where you were previously wandering in foreign countries. We want ideas that take us forward. And we will not be afraid to tell you that we have no room for those that take us backwards.”

According to Mr Uwizeyimana, nothing stops Ms Ingabire from making political statements as long as she abides by the law.

"The acquittal of #Rwigaras should usher in a new era for freedom of expression in #Rwanda" said by ...
Rwanda – USA: Congressmen mobilize for the Rwigara family
Rwandan entrepreneurs face blatant injustice said Diane Rwigara